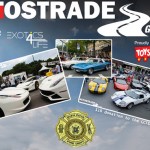 Autostrade Glen Cove is back in downtown Glen Cove. This bi-weekly event is held every other Thursday (May 26, June 9, June 23, July 7, July 21, August 4, August 18, September 1) through September 1st from 6 p.m. to 9 p.m. on School Street in Glen Cove. Participants who want to display their car in the show, a $10 donation is collected with all proceeds benefitting the Glen Cove Volunteer Fire Department. Admission is free to area residents who wish to walk the downtown and admire the exotic cars.

The City of Glen Cove closes thru traffic and invites Autostrade Glen Cove for spectators and Car Enthusiast to admire the vehicles. There is am estimated 170 exotic and vintage autos that are on display. “Autostrade Glen Cove exemplifies the diversity of our City’s summer events and our resident’s enthusiasm for cars and supporting our downtown restaurants and volunteer Fire Department,” said Mayor Reggie Spinelli [...]

Email to a Friend